Fearless at work, docile at home, the Bullmastiff is a large, muscular guarder who pursued and held poachers in Merry Old England'merry, we suppose, for everyone but poachers. Bullmastiffs are the result of Bulldog and Mastiff crosses. The Bullmastiff isn't quite as large as his close cousin the Mastiff. Still, standing as high as 27 inches at the shoulder and weighing between 100 and 130 pounds, this is still a whole lot of dog. After the first impression made by the Bullmastiff's size, it is the large, broad head that conveys the breed's essence: the dark eyes, high-set V-shaped ears, and broad, deep muzzle all combine to present the intelligence, alertness, and confidence that make the Bullmastiff a world-class protector and family companion. Coats come in fawn, red, or brindle. These are biddable and reliable creatures, but as with any large guarding dog, owners must begin training and socialization early, while the puppy is still small enough to control. 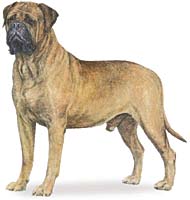