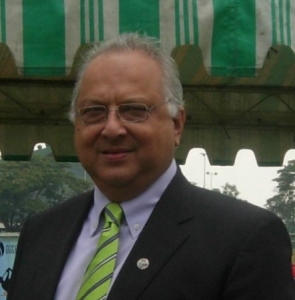 Mr. Imran Husain was born on February 4th, 1950. He is a businessman by profession. He started judging GSDs in 1977 and has judged more than 100 Specialty Shows and 55 All Breed Championship Shows. He is the only man in history to have won Supreme Champion at Crufts and The World Sieger titles with Ch. Ramacon Swashbuckler (1971) and Perle v. Wildsteiger Land (1982).

He has made up and owned more than a dozen Eng. Champion GSDs including Ch. Hengdrawen’s Nibelung of Charavigne, Ch. Ramacon Swashbuckler, Ch. Eveley’s Quill of Lexter, Ch. Nobelof Swansford, Ch. Letton Tergiskey Eloquence, Ch. My Gal of Hildesheim, Ch. Harmony of Eveley and Ch. Ailsa of Brinton among others.

He handled his first BIS All Breeds winner at the age of 10, in Bombay under the Judge Leo Wilson. He has handled GSDs in Pakistan, India, Germany, Eupropean Countries and the UK.

He has the distinction to be the first foreigner to be permitted to breed in Germany in 1982 and registered the affix “von der Fürstenperle”.

He is currently the President of the German Shepherd Dog Club of Pakistan which is a member of the WUSV.