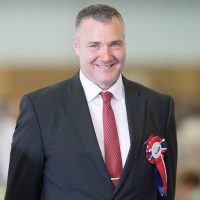 In 1996 he was elected an international judge for all breeds in FCI Group V.

He has been successfully involved in the Afghan Hound breed since 1983, and later the Sloughi breed joined the kennel. Apart from his native Serbian language, Dr. Tesics speaks fluent Hungarian, German and English languages.